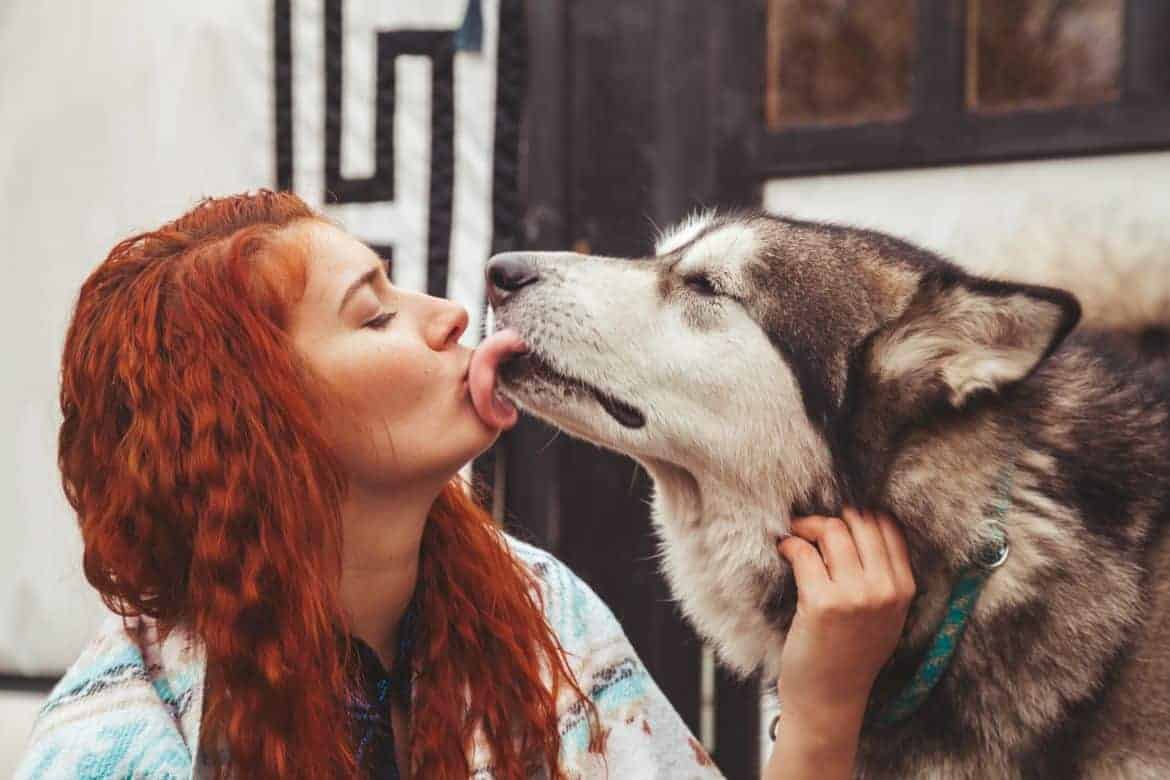 Is there anything more pleasant than coming home to a ‘kiss’ from a happy dog? Often, dog owners interpret licks from their dogs as signs of affection. Presumably, it’s the closest a canine companion can come to kissing their owner. Sometimes the wet slobbering can be frustrating. Could your dog be communicating something different? What if the licking is out of control?

In this piece, we discuss in-depth why your dog may be licking you.

Alexandra Horowitz from the Horowitz Dog Cognition Lab reports that in wild animals, puppies lick their mother’s face and muzzle when she comes from hunting to get her to regurgitate for them. Dogs communicate with us throughout the day, we simply aren’t good at interpreting what they are telling us. Licking is one way through which dogs communicate.

Here are some reasons why your dog may be licking you:

Your dog may lick your face or that of a stranger as a gesture of appeasement. It shows a dog’s social deference.

Scented body washes and lotions on your skin may be appealing to your dog. Most dogs enjoy the taste of salt on your skin, especially after a workout. Pay close attention to when your dog licks you. There may be something on you that they are after.

A UK research showed that dogs have an empathetic response to human distress. When people display distress around their dogs when stressed or upset, their dogs respond by sniffing, nuzzling, and licking them. This pattern of response is consistent with offering comfort.

Your dog licking you, especially the hand and eyes, could be a sign of submission. This is a natural instinct derived from the wild where dogs showed submission by licking the more dominant member of the pack. Canines also licked their pack leader when they reunited with their pack to show they missed them and are their obedient companion. It helps ease the stress induced by separation, known as separation anxiety, especially if you have been absent.

Exploring and gauging the outside world

While humans use their hands to touch and explore things, dogs use their tongues to taste, scent, and understand the world. Your canine friend may also lick you to gauge your mood. The pheromones we emit through our sweat can be easily decoded by dogs to better understand our mood.

If your dog turns to lick you when they want to play or are hungry, it is probably because you have encouraged it. Wondering how you did this? You have unintentionally taught your dog that licking is a good way to get your attention; hence it becomes a learned behavior.

Like humans, dogs can also develop compulsive disorders such as licking. OCD is often a result of anxiety and stress. Dogs with OCD tend to constantly lick things or people around them and may even develop sores on their tongues. In such situations, you need to consult your veterinarian.

Do Some Dogs Lick More than Others?

Generally, dogs are known for their uncanny sense of smell. Certain breeds, however, are overly sensitive to new scents, tastes, and smells. This may affect how much your dog licks you. Some good examples include Bloodhounds which have a whopping 300 million receptors, Beagles and German Shepherds have about 225 million, Fox Terriers have about 147 million and Dachshunds have about 125 million scent receptors. Each dog, nevertheless, has an individual personality and may display their emotions in a unique manner.

Why Is My Dog Constantly Licking Itself?

Dogs tend to lick areas of their bodies where they are hurt or infected. Constant licking is a great way for owners to know that their dogs are in discomfort or pain. Another reason why your dog may be licking their lips a lot is nausea. Some dogs also result in licking people and objects around them for comfort. Usually, they are suffering from separation anxiety.

Excessive licking in older dogs may be a sign of dementia. Repeated licking is a sign that your dog is stressed, nervous or scared. Additionally, dogs may also lick their housemates or themselves as part of a grooming routine.

A dog’s saliva doesn’t pose a health risk. However, you are advised not to allow your dog to lick a wound on your skin. The saliva is likely to moisten the wound and keep it open, allowing bacteria to thrive. This poses the risk of a potential skin infection. CDC has reported cases of dog owners who have gotten sick from the Capnocytophaga canimorsus bacteria found in cats and dogs. The bacteria are harmful to humans but harmless to them.

Should You Allow Your Dog to Lick You?

Typically, a dog licking your face should pose a minimal health risk as long as you’re healthy and do not have a compromised immune system. If you are wary of the behavior, do not let your dog lick an open wound on your skin or mouth. The underside of your chin is a good alternative, after which you should wash your face or immediately sanitize. Hand licking is also harmless and should be followed up with cleaning your hands or sanitizing.

How to Train Your Dog to Stop Licking You

Once you have confirmed that your dog’s excessive licking isn’t due to an underlying medical problem, it may be time to handle the behavioral issue. Below are tips on how best to stop your dog from licking you.

Positive reinforcement is one of the most effective training techniques. Praise and give your dog attention whenever they are well behaved. An illustration of good behavior is, for example, when they are calmly lying beside you. This intimates that licking isn’t a good way to give them what they want or need.

Unintentionally, you may have reinforced licking as a way for your dog to get attention. When they lick you, get up and leave the room. This will show your dog that licking doesn’t get the attention and does the exact opposite.

When your dog starts licking you, redirect or distract them with an activity. The activity you switch to should be incompatible with licking, such as sniffing out treats or playing with an interactive puzzle. Another helpful tactic would be to teach them tricks. Repeatedly redirecting your dog will gradually reinforce that licking isn’t an acceptable behavior without having to be unnecessarily hard on your dog.

It can be confusing when sometimes you let your dog lick you but not during other times. Set clear boundaries between you and your dog. It may seem hard to stop them from licking you, especially if you perceive it as affection. However, it is essential to remember that you can teach them to show affection in other ways, such as ‘speaking’ on cue or hugging.

It is natural for your dog to lick you every now and then. A better understanding of the frequency and intensity of your dog’s licks will help you determine what your dog is feeling. If you aren’t much for dog licks, the above tips will help you discourage the behavior. If you can’t seem to manage your dog’s tendency to lick you, consult a behavioral specialist or a veterinarian.